This post about Andre Norton is the leadoff for a series I intend to write about writers who have influenced and shaped both my reading and my writing over the years.  They won’t be very profound–mostly just retrospectives and appreciations.

Andre Norton (February 17, 1912 – March 17, 2005) is the name she is most commonly known by.  And yes, she was a successful female writer at a time when most of the industry consisted of male writers.  Her birth name was Alice Mary Norton, but she used at least three pseudonyms over her lengthy career.  Andre Norton appeared on most of her books, but she also used Andrew North and Allen Weston.  According to Wikipedia, she legally changed her name to Andre Alice Norton in 1934.  She is most well known as a science fiction and fantasy writer, although she did dabble in other genres over the years.

Unlike most of her contemporaries, Andre Norton was primarily a novelist.  She wrote very little short fiction in her early career, and even though her output of short work increased in her later career, it was still very definitely the minority of her work.  It was her novels that I fist encountered, and those were responsible for my becoming a science fiction reader.  Also unlike most of her contemporaries, almost all of Norton’s output had initial hardback editions, even the earliest works published in the 1930’s and 1940’s.  Up through the 1970’s, most of her books were published as hardback young adult novels by her publishers, and I suspect a large proportion of the sales of those books were to libraries.  That’s certainly where I found most of her books over the years.

Her science fiction novels were reprinted in paperback mostly by Ace Books in the early years.  A couple of them had title changes in the initial printings–Star Man’s Son became Daybreak 2250 A.D., Star Rangers became The Last Planet. Her book Beast Master was lightly abridged for its first few paperback printings.  All of these reprint editions were noticeably devoid of any indication that they were reprints of juvenile/young adult books, though.  They were marketed to adults, and sold quite well for decades.  I certainly never considered them anything other than great stories. 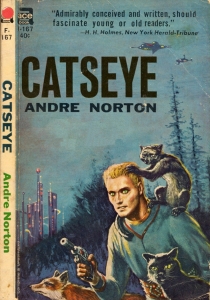 My initial exposure to Andre Norton came through her novel Catseye, which I still consider to be one of her best works.  It was my first real taste of serious science fiction.  It was my step up from middle grade books like The Wonderful Flight to the Mushroom Planet and the novels of Edward Eager.  Norton took me to the next level.  She was my gateway drug, if you’ll accept that metaphor.  And I still find it both ironic and humorous that I got that 40 cent Ace Books edition of Catseye at school by way of the Scholastic Book Club.  The cover price of the book was 40 cents, but through the book club I got it for 25 cents.  I still think that is the best quarter I ever spent.

It used to be pretty common that writers would talk about one of the strengths of science fiction as a genre was the “sense of wonder” that it generated.  That is exactly what Andre Norton did to and for me–reading Catseye awakened that sense of wonder in the mind of a 6th grade boy in January 1963.  Fifty-five years later it’s still alive and burning brightly, and now I write the stuff.

Andre Norton was a great story-teller.  I was drawn into–sucked into–her stories very quickly, and I seldom put them down after starting them before reaching the last page.  And I would reread them almost as voraciously as I read them initially.  I enjoyed the story and the story-telling just as much the second and third and fifth and ninth times as I did the first.  She had that effect on me.  Her story-telling gift was part of what attracted me to the idea of writing.

She told good stories about good characters.  Because most of her earlier works were written for the juvenile/young adult market, the protagonists were usually youths, but they were never stupid or childish.  I had no trouble identifying with them as competent people even when I was in my late 20’s and early 30’s.  Norton was also one of the first authors that I read who wrote strong female characters and even used them as protagonists.

As her career progressed and she got older, a lot of her science fiction and space opera would kind of cross the line into fantasy.  Her delving into Gothics were also very fantasy influenced, I think.  Her last years were almost totally devoted to fantasy, except for a few collaborative novels in her Time Trader and Solar Queen series.  The pinnacle of her career is probably her Witch World series, which started out as an alternate history story, but very quickly morphed into a full-blown fantasy series.  I fell in love with this series and devoured each new volume as soon as it came out.

One of the things I greatly regret is that Norton never seemed to get much critical attention until very late in her career.  It seems like it wasn’t until writers of my generation who grew up reading her books became popular that she started getting some of the renown she really deserved.  People like David Drake, Eric Flint, Mercedes Lackey, David Weber, and others began mentioning her as being a formative influence.  As a result, her last few years seemed to have her being more appreciated and more valued.  I think it’s appropriate.

Another great regret is I never got a chance to meet Andre Norton face to face.  I did get to talk to her on the telephone a couple of times back in 1974, so I do have those memories. 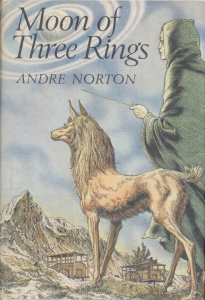 My favorite books by her include Catseye, Star Guard, and Star Rangers from her earlier works, and Moon of Three Rings, Year of the Unicorn, and The Crystal Gryphon from her later period.