If there is a single author on this planet whose name is more widely known than that of J. R. R. Tolkien, I have no idea who it would be.  He is an incredibly important author in the history of 20th century literature.  In fact, author and fellow professor Tom Shippey presents a case for Professor Tolkien being the most important writer of the 20th century.  J. R. R. Tolkien perhaps almost single-handedly is responsible for the rise of fantasy as a popular genre in the second half of the century.  Talk about casting a giant shadow—the man did, and still does, even though he died in 1973.

John Ronald Reuel Tolkien was born in 1892.  His Wikipedia article does a rather nice biography, so I’ll not repeat any of that.  And I don’t want to spend much time talking about Tolkien’s writing career.  There are numerous articles about that as well.  Instead, I want to consider J. R. R. Tolkien from a personal viewpoint–how he touched me first as a reader and later as a writer. 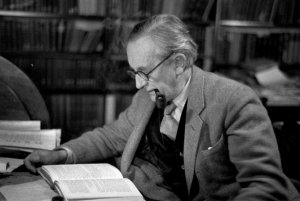 I first discovered J. R. R. Tolkien in 7th grade.  I was omnivorously devouring all the science fiction and fantasy I could find in my local library, and had just recently discovered the science fiction section in the adult stacks.  Among the volumes in that section were three books by Tolkien:  The Fellowship of the Ring, The Two Towers, and The Return of the King (a/k/a The Lord of the Rings).  This would have been early 1964, so I was 12 years old.  This was before the paperback editions were available, so these were the big hardback volumes published by Houghton Mifflin, with the big foldout maps in the back.

Now, I didn’t know anything about trilogies.  I’d never seen one before.  I had no idea that it was possible to write a story arc that would continue across multiple volumes.  So guess what happened.  Right.  I read them out of order.  I read the last volume first, then the first volume in the middle, and the middle volume last.  I was so confused.  It was a few months later before I figured out what had happened, which caused me to reread them in the correct order.  Things made a lot more sense the second time around.  (For what it’s worth, I did the same thing the first time I read Isaac Asimov’s Foundation Trilogy, with much the same result.)

As a reader, I was gobsmacked.  First of all, the story was huge.  (Approximately 450,000 words.  For comparison, Tolstoy’s War and Peace is about 600,000 words.)  This was the first time I had encountered a story arc that ran for more than a single volume, and the scope that allowed Tolkien to adopt just astounded me.  I fell in love with the sheer size of the story, and all the detail that it allowed Tolkien to present.  I had read The Hobbit not long before that, and while I had enjoyed it, it absolutely did not grab me like the trilogy did.  Secondly, even as a young reader, Tolkien’s world building just enraptured me.  Elves, Dwarves, Orcs, Ents, and the casual mention of thousands of years of recorded history–I ate it all up and cried out for more.  Third, when the Ballantine paperback editions came out the following year and I was able for the first time to read the Appendices that were available in that edition of The Return of the King, I was in heaven.  I was already a bit of a history geek, but I had never encountered a fictional history before, and that just pushed all my buttons.  I still remember the “Wow” I felt the first time I finished reading the Appendices.

I read the trilogy twelve times cover to cover over the ensuing eight years, and who knows how many times I reread my favorite passages–probably forty, at least.  And it very quickly became my answer to the question–you know, the one that goes “If you were marooned on a desert island and could only have one book, which one would it be?”  No thought required:  The Lord of the Rings.  And truth to tell, that is still my answer today.

I became moderately knowledgeable about the details of the story.  I knew more LOTR trivia than anyone I knew, although I was never in the running for all-time LOTR trivia geek.  I used the tables in the Appendices to translate the rune bands on the title pages of the individual books.  (If you didn’t know there were messages in those rune bands, then you’re not as big a fan as you thought you were.)  When Caedmon Records put out the spoken arts recordings of Tolkien reading some of his material, and the Donald Swann song cycle based on Tolkien’s poems (The Road Goes Ever On), I bought those immediately.  And for a long time I had a copy of every American edition of both The Hobbit and The Lord of the Rings, but I finally had to give that up when my Tolkien collection was taking up over half the space I had for books.  (Nowadays I just have a copy of each textual edition, plus most of the limited deluxe editions.  That’s at least six copies of The Hobbit–including the original 1938 first American edition–and at least four copies of LOTR.)

The Lord of the Rings became the standard against which I measured everything I read, and not much compared well to it.  I grew very tired of the constant advertising comparisons “The greatest book since The Lord of the Rings.”  It took me a while to become a little more balanced in my evaluations of other writers and other books.  And oddly enough, the first book that really broke through was Frank Herbert’s Dune, which was a very different book indeed, but had some of the same sense of huge scale and exceptional world building.  So even today, due to the influence of Tolkien, my favorite books all feature outstanding world building. 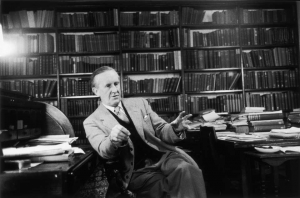 I reread LOTR not long ago, for the first time in a lot of years.  It held up extremely well, although I found myself critiquing the writing much more than I had ever done before.  Side-effect of being a professional writer myself, I guess.  When I was done, I decided that while J. R. R. Tolkien was a really good story teller, there were others who are just as good, if not better.  But no other writer will ever affect me as he did.